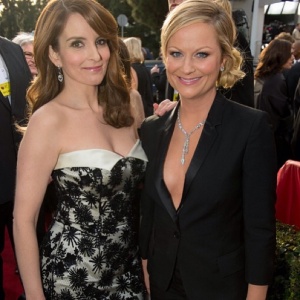 Page 3 this week throws the spotlight on two amazing women – Amy Poehler and Tina Fey. While these two could easily be the subject of two articles as individuals, their careers have been so closely entwined that it made sense to celebrate the two as a pair. They also represent female friendship as it actually is – supportive, empowering, loving and FUN. The day gossip magazines start fabricating jealous cat fights between these two is the day I show up at their offices and reign fiery vengeance upon them.

Amy and Tina are award-winning actors, comedians and writers with outspoken feminist views. Comedy is one of those areas where sexism is particularly rife and their success speaks volumes at the quality of their work. They met at an improv class in 1993 and later worked together on Saturday Night Live, where Tina was head writer (the first female head writer, in fact, and the pair were also the first two females to host the Weekend Update segment together – the show started in 1975, so this was a pretty big deal). Amy’s portrayal of a little girl named Kaitlin is also one of the funniest characters in the history of SNL and made me pee my pants more than an acceptable amount. In Tina’s hilarious and awesomely feminist autobiography, Bossypants (which topped the New York Times Bestseller list for five weeks and which I will totally lend you), Tina relays an exchange between Amy and Jimmy Fallon during her first few weeks at SNL. Amy was engaging in some loud and crude vulgarity in the writers’ room when Jimmy jokingly told her to cut it out, saying, “It’s not cute! I don’t like it!” Poehler “went black in the eyes for a second, and wheeled around on him,” forcefully informing him: “I don’t fucking care if you like it.” She wasn’t there to play wives and girlfriends alongside the male cast, she was there to do her own thing and she taught Tina a valuable lesson about ignoring what you were ‘supposed’ to do. For Tina, it also perfectly summed up her argument against the Women-Aren’t-Funny brigade:

Yes. We don’t fucking care if you like it.

I don’t say it out loud, of course, because Jerry Lewis is a great philanthropist, Hitchens is very sick, and the third guy I made up.”

They went on to prove the hilariousness of womankind by teaming up in Mean Girls (which Tina wrote), Baby Mama and The Nest, and co-hosted the Golden Globes together for two years running, resulting in the best ratings for the awards show in a decade. Separately, they also had several successful TV shows and films, with Amy receiving the 2014 Golden Globe for Best Actress in a Television Musical or Comedy Series for Parks and Recreation and Tina racking up an incredible 112 Emmy award nominations for her creation, 30 Rock. If I listed all of the pair’s awards I’d use up all my word count, but you get the picture. These two get shit done. They’re also brilliant examples of creating female networks and actually pulling others up the ladder with you, rather than pushing them off to die, like Mufasa in the Lion King. Amy even started an online community for young women, parents, teachers and fans, with the intention of creating a network of engaged, confident and ambitious females, called ‘Amy Poehler’s Smart Girls’. It encourages volunteerism, civic activism, cultural exchange and self-expression through the arts. The summer camps it runs is already wildly popular and runs research-based activities that teach about critical thinking, social justice and one’s own ability to create change for good. If they weren’t for ages 14-18, I’d be buying a plane ticket and getting my arse to camp.

Tina and Amy inspire me and I hope they inspire you too. The next time someone tells you that you can’t do something, or be something, because they don’t like it when women do or be certain things, then think of Tina and Amy and use their wise words: