I woke one morning recently with a pretty bad hangover and staggered to the bathroom to inspect the damage. This usually consists of checking whether my eyes are gummed together with last night’s make-up, whether my fake eyelashes are stuck to my chin or whether I have transferred a hand-stamp to forehead. This time, however, there was something new. Beyond the usual mascara catastrophe or gin-fed pimples.

I had forehead wrinkles.

Now, I’m not an eejit. I’m fully aware that at 26 years old, I’m going to obviously start developing visible signs of ageing and that these are going to be relatively minor. I’m not saying I woke up looking like Mickey Rourke. But the wrinkles were there and they terrified me. They weren’t my first wrinkles – I’ve been rocking a little mouth wrinkle for the past year or so. However, this was only on one side of my face which gave me the nice delusion that I have a cute, wonky smile a la Patrick Wilson, so it was easier to ignore.

After spotting them in the mirror, I immediately went online to research Botox and fringes. I bought a new night cream and skin serum, and every time I frowned at the price of these products, I’d desperately smooth my forehead out with my fingers.

The next morning, my eyes were drawn to the sea of foreheads joining me on the commute to work. On the Tube I glared at every hairline, comparing people’s foreheads to mine and trying to guess how old they were. A baby boarded the train (accompanied by a parent, obviously) and I was jealous of its forehead.

As I walked through the Underground station on my way out, my forehead-pervert eyeballs glued to the advertisements lining the walls, I noticed something. 100% of the women shown in the ads did not have forehead wrinkles. Of the men, approximately 60% did not have forehead wrinkles. So there were far more male forehead wrinkles. Even on ads depicting older people of mixed genders, the men would have their forehead wrinkles and the women, even those with greyish hair (usually that in-between blonde and grey colour they always use on older women), would have these Photoshopped or Botoxed out. No wonder I felt like a bulldog! In the idealised world of the media, women do not visibly age. Their wrinkles are considered inappropriate, and wholly unsuitable for the public eye.  Men, too, are supposed to hang onto their youth as much as possible but at least they’re allowed to reach that “grey and distinguished” stage, and have a huge range of highly sexualised celebrities in the limelight they can look to who proudly display their wrinkles (Depp, Pitt, Clooney being the Holy Trinity). Major female celebrities with wrinkles seem to comprise solely of:

And that’s about it.

A film came out recently which utilises almost half of these stars, and is a rare example of a film which explores the lives of older women. Let’s take a look at its poster: 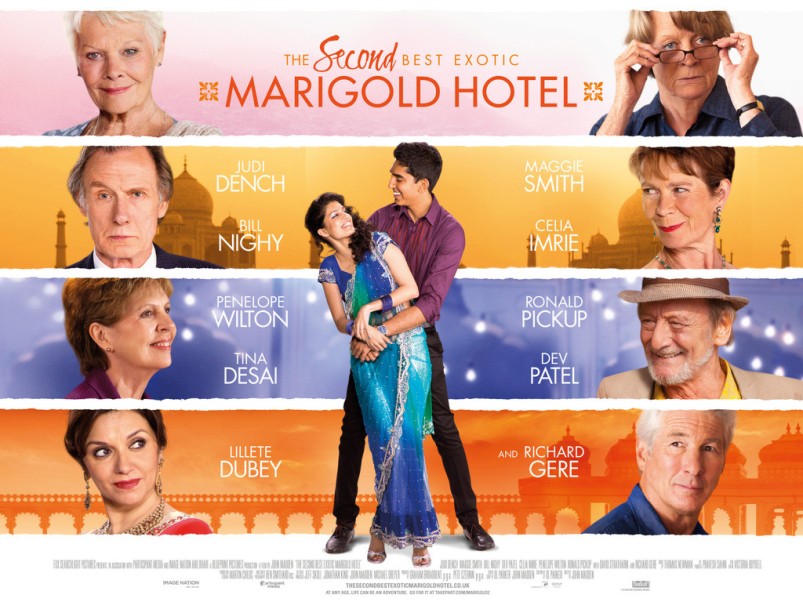 Putting issues of colonialism aside (as this film did), there’s a strange pattern of visible ageing here. We’ve got some light forehead wrinklage from Maggie Smith and Judi Dench – these are women in their eighties, remember – but the rest are hidden away with fringes or almost non-exist in the case of sixty-something Lillete Dubey. Now look at the bad boys on Richard Gere and Bill Nighy. They’re younger, but are allowed to show their age in a way the women can’t.

I’m not blaming the female actors for their smooth foreheads. They’re obviously under enormous pressure to look younger, and everyone knows that roles for women dry up the older they get. It’s a shame because their job is literally to emote and if they succumb to the pressure to look youthful, they inevitably give up the ability to move their faces as well:

We know, after all, that women cannot have everything.

A lack of representation for older women not only renders them invisible in society but it also creates unrealistic expectations and fear in younger women. So how underrepresented and misrepresented are older women?

Of course, these facts also fail to take race into account. Ethnic minority women over 40 suffer pitiful levels of media representation – I was unable to source a single study that even looked at the issue.

So who’s benefitting from the extreme culture of youth that we have in the Western world? Unsurprisingly, it’s the same culprit that benefits from the wider idea that a woman’s value lies solely in her appearance – the beauty industry. Older women often have more money than young women, so it’s smart business to make them feel shitty about themselves until they purchase the means to make themselves look younger. It works particularly well as younger women will spend increasing amounts of money as they get older, replacing the market each time.

If we look at the less ‘invasive’ anti-ageing products, we can see that in 2012, the UK skin care market reached a value of £2.1 billion. That is an incredible amount of money to make, particularly during the tail end of a global recession. The value of the UK cosmetic procedures market is growing too. It was worth £2.3bn in 2010 and is estimated that it will grow to £3.6 billion by 2015. Non-surgical procedures (which includes Botox) account for 75% of this total, and around 90% of all cosmetic procedures in the UK are carried out on women. So it’s worth it for companies to encourage feelings of deep insecurity in women.

After looking at these facts, I was predictably less enthused about buying into the ‘youth scam’. After all, every day I see women who have visible wrinkles and are no less gorgeous for it. The more we’re exposed to women in their natural state of ageing, the more normal it will look to us and the less likely we’ll be to rush to the beauty counter or cosmetic surgeon’s office at the first sign of a wrinkle. By way of example, see below for a photograph of my mother. She gave her permission with an amazing, “I’m nearly 50 so go for it, girl!” and is clearly straight up beautiful: 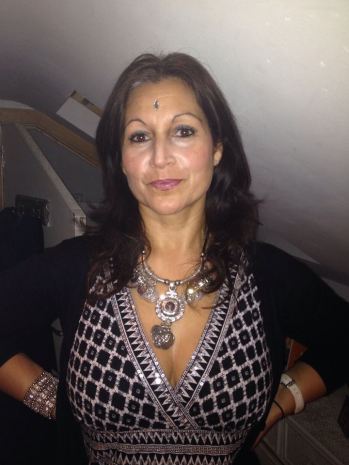 Anyone who knows my Mum will also know that she is a woman of excellent facial expressions. In every wrinkle, there are thousands of ‘I don’t like the sound of that’ screwed-up-faces, ‘You’re being a silly twat’ pointed-looks and ‘Politely showing surprise while being bored senseless’ raised-eyebrow-faces. I love that you can see what an expressive woman she is, and all of the joys, sorrows, rages and boring dates she’s been through.  Once I got over the shock of seeing my own forehead wrinkles, I realised that they too show my experiences (as well as the eyebrow-waggling genetics of both my parents). This can be additionally helpful in the workplace – I feel like my academic career, with all those late nights in the library eating Tangfastics and Googling ‘quotes on Modernism’, is clearly visible in my face and lends a more knowledgeable air. A friend of mine admits to wearing ageing wire-rimmed glasses when she works, to avoid patients asking nervously when she qualified. While this demonstrates the increasingly difficult tightrope women are expected to walk – not old enough to have wrinkles, not young enough to be considered inexperienced – it can be comforting knowing that your first wrinkles will possibly make you look that much wiser.

I, for one, am learning to embrace my baby wrinkles. Make-up does collect in them throughout the course of the day, which is annoying, but this is only one of the many annoying things associated with wearing make-up, so it’s okay. My wrinkles show that I’ve lived. So come, let’s marvel at our forehead wrinkles! And our crows feet, and our grey pubes. Let’s revel in the memories that our bodies have given us, and admire the evidence of those memories.

I hate to end this post with a quote from Marilyn Monroe because it makes me feel like a living Pinterest board, but I think this one is particularly poignant and makes us remember the true value of ageing:

“I want to grow old without face lifts. They take the life out of a face, the character. I want to have the courage to be loyal to the face I’ve made.  Sometimes, I think it would be easier to avoid old age, to die young, but you’d never complete your life, would you? You’d never wholly know yourself.”

Let’s be grateful for the evidence that we’ve known ourselves.