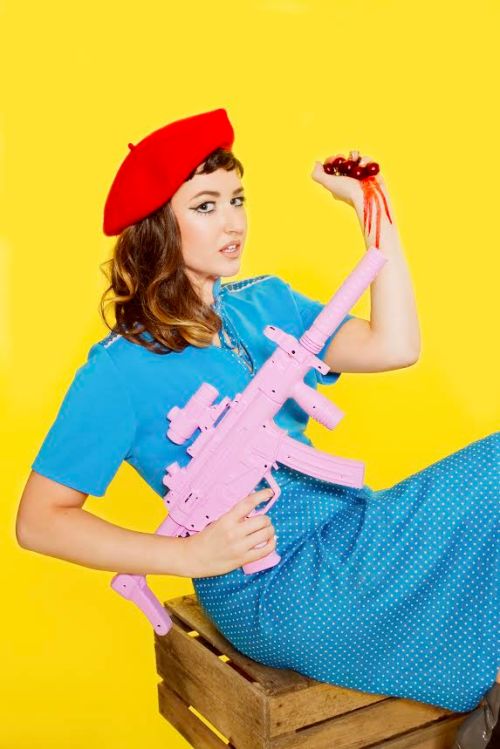 Louise Orwin’s A Girl and A Gun is headlining Camden People’s Theatre’s third annual festival of feminism, Calm Down, Dear. Louise is an acclaimed live artist, researcher, writer and performer. Her new solo show explores the relationship between girls and guns in film. It’s a show that asks two people to take to the stage and play out a film script in front of you. It asks what it means to be a plot device, what it means to be a hero, and what it means to watch.

In many ways, performing A Girl and A Gun can feel like going on the strangest blind date ever. Every night the show is performed by me and a new man – someone who has never seen the show or the script, and most of the time, has never met me before. To my mind this distance, physical and intellectual, from the show, enables the audience to more clearly see the decision-making process one goes through when challenged to fulfil a role which might be at once familiar and strange.

A Girl and A Gun asks just how easily we can fit into the highly gendered roles presented to us by most cinema, both mainstream and independent and in particular, those films which star a girl and a gun as their main plot devices. It explores how the attitudes and ideas shown to us in film can become internalised and normalised- this might be exemplified by the ease with which we might pick up a toy gun and ‘play’, or how unfazed we might be with the image of a woman on her knees in front of a man.  It asks us to draw on the vault of our own stored images we dip into in order to contextualise and understand this imagery. Going one step further, this asks how that familiarity of these images might change if they were performed live in front of you, rather than existing in the world of cinema and television.

I began making A Girl and A Gun after asking myself some hard questions about my own appetite for violent, stylish films. As a fan of cinema, I’ve found that from a young age I’ve been particularly drawn to the image of the ‘femme fatale’ on screen. However, as my politics have developed, I find myself equally as repulsed by this image, as I am attracted to it. I also wonder how much of my own imagined ideals regarding ‘femininity’  and womanhood have been intrinsically shaped by exposure to the glamorous, highly sexualised, mysterious and often endangered/troubled/prostrate/dying/dead (urgh, sorry) women I find so enticing on film. Since making this show I’ve had lots of conversations with people about this exact same feeling: what is it that draws us to the beautiful and damned women in David Lynch’s work, the powerful, highly sexualised and often dead/dying women in Tarantino’s oeuvre, or in more mainstream cinema: practically every role Angelina Jolie has played? There is no doubt as well, that this kind of hyper-sexed, hyper-violent role has become more and more acceptable/accepted in the mainstream. You don’t need to look much further than Game of Thrones, or Taylor Swift’s last music video to see that. The problem with this kind of imagery is that it can be very confusing: seemingly empowered and yet still prostrate at the altar of unrealistic beauty ideals and the misguided notion that ‘sexiness’ equals power (or at the very least, that sex is the only way to harness power). The last frame of Taylor Swift’s music video ‘Bad Blood’ holds the image of seven bold and seemingly empowered women stomping towards a battle ground, but blink again and all you might see is seven fem-bots marching towards a camera, coiffed and preened to within an inch of their life.

A Girl and A Gun asks the audience to consider their own appetite for this kind of imagery. It hopes that in the act of re-peating, re-staging, and exaggerating these familiar images and scenarios, we might be able to re-consider them our relationship to them. By making an unprepared stranger the ‘star of the show’ every night, it is my hope that audiences will consider how they might feel if they, too, were put in this position; and in watching this newcomer grapple with decision-making, they might ask difficult questions of themselves too.

– Louise Orwin is a live artist, researcher, writer and performer. Her work spans the live and the recorded with incarnations in performance, video and photography. She is preoccupied with liveness, awkwardness, femininity and masochism – but above all, she likes to have fun. Follow her at @louiseorwin.

Catch A Girl and A Gun by Louise Orwin at Calm Down, Dear festival of feminism, which takes place at Camden People’s Theatre between Wed 16 Sep – Sun 11 Oct. For more information, head to www.cptheatre.co.uk